The EU REDD Facility, hosted by the European Forest Institute, is conducting in collaboration with the Indonesian Civil Society Organisation KARSA (Lingkar Pembaruan Desa dan Agraria) a study to assess options for legal and sustainable production and trade of timber from customary forests. The focus will be on integration of customary forests into Indonesia’s timber legality assurance system (Sistem Verifikasi Legalitas Kayu – the SVLK). The study will inform subnational multi-stakeholder dialogues and national-level policy process on customary forests and legal timber production.

A preliminary analysis by the EU REDD Facility indicates several legal pathways to achieve the objectives of the ruling. However, they result in different forms of recognition, with land either staying within state forestland or being excised. The process set out under Forestry Law and administered by the Indonesian Ministry of Environment and Forestry currently offers the most well developed route for customary forest recognition.

The Ministry of Environment and Forestry has formulated several policies to accommodate the customary forest recognition process. However, further institutional and/or financial support, as well as regulatory clarifications, are needed to accelerate the process and ensure that the policies are beneficial for customary groups.

There are many ways in which customary groups protect, manage, and utilise their forests. For example, some rely on logging and the timber trade to support their livelihoods. Developing specific legality and sustainability definitions for timber production in customary forests could therefore help enhance social, economic, and environmental benefits from customary forest management.

Without an operational scheme for customary forests under SVLK, customary groups in Indonesia cannot legally sell or transport timber. The SVLK is a mandatory legality and sustainability certification system built on a national multi-stakeholder consensus that is also accepted under the Voluntary Partnership Agreement (VPA) between Indonesia and the European Union (EU) on Forest Law Enforcement, Governance and Trade (FLEGT). In fact, the VPA text explicitly states that “changes in the procedures for utilisation and/or administration of timber from Customary Forests, to address implementation of Constitutional Court Decision (MK) No 35/PUU-X/2012, shall be introduced after the adoption of related implementing legislation”. Amending the SVLK to potentially integrate  timber from customary forests as per the VPA’s mandate would advance equity by opening livelihood opportunities for customary groups, while also reducing illegality, deforestation, and forest degradation.

Under this project, the EU REDD Facility and KARSA are providing analysis and holding consultations in support of a review of the SVLK legality definition to potentially accommodate customary forests, in order to promote sustainable customary forest management, protect against forest conversion and reduce related carbon emissions, and improve the prosperity of customary groups in Indonesia.

The project approach to meet the objective is to:

The desk review, field research in several customary groups-managed forests, and focus group discussions employed in this study are expected to help build a common understanding, define a way forward, and develop safeguards for mitigating risks associated with potentially integrating timber from customary forests into SVLK. The study could inform multi-stakeholder policy processes on the options for addressing customary forests in the SVLK standard supply chain control and verification procedures, for example through the revision of relevant ministerial regulations.

The study’s progress, results, and impact will be posted on this webpage as they become available. These include minutes from key consultations and workshops. 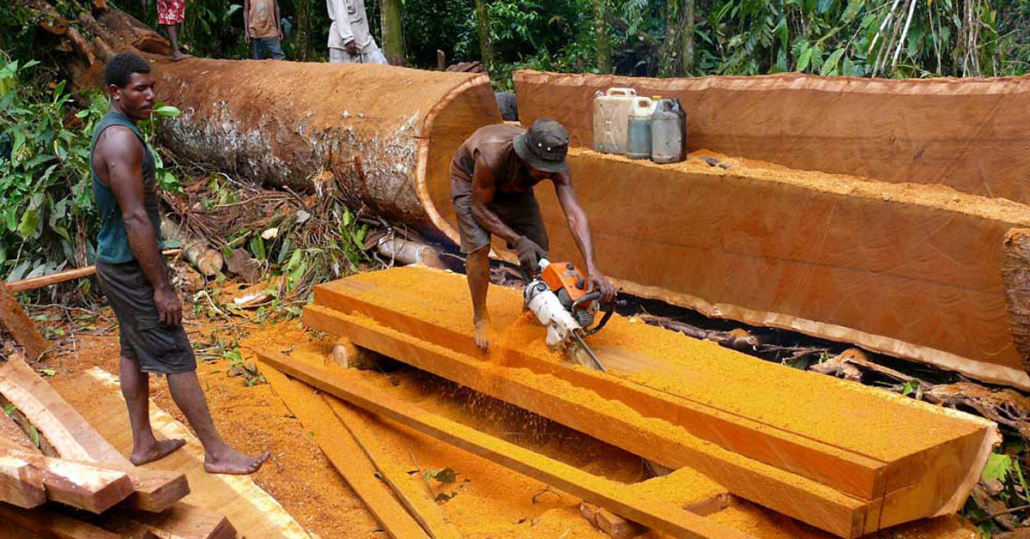 A villager uses a chainsaw to cut a felled tree into planks. Papua, Indonesia.