You are here: Home1 / Blog2 / Taking stock of national climate plans: what’s in it for forests?

In the lead up to the adoption of the Paris Agreement on climate change in 2015, each country was asked to outline its post-2020 climate plans, known as their nationally determined contributions (NDCs). Taken collectively, the initial plans put forward by countries did not go far enough to reach the Agreement’s goal: to limit global average temperature rise to “well below” 2 ºC above pre-industrial levels, and to “pursue efforts” to limit it to 1.5 ºC.

However, the Paris Agreement gives countries the opportunity to increase their climate ambition, by updating their NDCs every five years. It’s now time to take stock: have countries’ revised climate plans matched the increase in ambition needed to effectively address climate change?

Nature-based solutions as an opportunity for raising climate ambition

For countries updating their plans to take more ambitious action on climate change, nature-based solutions offer essential tools and opportunities. Conserving, restoring and improving management of forests, wetlands, grasslands and agricultural lands can deliver a third of cuts in emissions needed by 2030 to help keep warming below 2 °C. These nature-based solutions also help countries and communities adapt to the impacts of climate change and contribute to achieving the Sustainable Development Goals (SDGs).

A large majority of the first round of NDCs included nature-based solutions in one form or another, but overall, these pledges were not quantified and did not outline coherent strategies for achieving them. Moreover, most didn’t consider the forest and land-use governance reforms that are essential to their implementation. The NDC revision process therefore provided an opportunity to strengthen the role of these natural solutions.

The EU REDD Facility has assessed the revised NDCs of several of its partner countries, and that of Brazil. Brazil, Colombia, the Democratic Republic of the Congo (DRC) and Indonesia are home to four of the top five largest remaining tropical forests. Looking at these countries as well as Cameroon, Ghana, Laos, Liberia, the Republic of the Congo (RoC), Thailand and Vietnam, a very mixed picture emerges in terms of increased ambition generally, and of the treatment of nature-based solutions in particular.

Have countries ramped up their climate ambition?

On overall pledges to reduce emissions, the glass is half full. Some countries have ramped up ambition in varying degrees, such as Colombia, Cameroon, DRC, Laos or Vietnam. Others, such as Ghana, Indonesia or Thailand, have resubmitted their 2015 pledges, while RoC has reduced its mitigation ambition.

In terms of NDC scope, the revision process has led most countries, apart from Thailand and Ghana, to cover more sectors and greenhouse gases than in their initial contributions. For example, Liberia’s revised NDC covers emissions from the forest sector, which were excluded in its first NDC.

A missed opportunity for the forest and land-use sector

In their revised NDCs, countries have an opportunity to be clearer and more specific by adopting measurable targets and explaining how they were calculated. To help determine how they can be supported to achieve their climate targets, they can also be clearer about their financial needs. On these aspects, overall, the revised climate plans we analysed made progress. For example, Colombia, Liberia and Vietnam, which had not provided cost estimates in their first NDCs, did so in their revised submissions. Cameroon, Colombia and DRC also detailed the emission estimates for each sector and planned activity.

More countries have included an overall target for the agriculture, forest and land sector in their revised NDCs, including Colombia and Liberia. All countries assessed, other than Thailand, put forward at least one quantified target related to this sector:

Nonetheless, numerous forest-related targets are still unquantified. This is a missed opportunity to enhance understanding towards countries’ commitments, raise the profile of the agriculture, forest and land sector and attract more public and private support.

Overall, forest governance is still insufficiently addressed in the revised NDCs. Few mention participatory processes, indigenous and local communities’ rights, land tenure or forest monitoring efforts. And when governance issues are mentioned, they are often not adequately articulated to ensure they will be integrated into the NDC’s implementation:

Most deforestation drivers, such as agricultural expansion, mining or the collection of fuelwood, come from outside the forest sector. A number of revised NDCs address them:

However, only Colombia, Liberia and DRC clearly draw links among sectors.

Other countries, such as Laos and Indonesia, present renewable energy targets that rely heavily on biomass or hydropower, which carry the risk of driving deforestation. These countries do not analyse the potential impact of these energy or agricultural targets on achieving their forest and land-use objectives.

The small number of countries that analyse the trade-offs across sectors of their NDC pledges illustrates that inter-ministerial coordination is still often lagging.

Liberia is one of the few countries that mentions the creation of an inter-ministerial task force on land-use planning to ensure coherence in NDC implementation. However, this task force does not include the energy and mining sector stakeholders, although mining and charcoal and biofuels production could have significant impacts on the forest emissions of this country. RoC also envisages the creation of an institutional mechanism to ensure inter-ministerial coordination. However, its articulation with the existing relevant coordination mechanisms in the country is unclear.

Overall, many of the revised NDCs analysed do not read like strategic documents integrating existing and planned national policies. For example, revised NDCs should draw linkages with the SDGs to ensure and assess the alignment and integration of climate-related policies and measures with development needs and strategies. The alignment of these two agendas, as well as with other relevant processes, such as national adaptation plans or FLEGT processes, is imperative to increase efficiency and maximise resources, technical capacity and expertise sharing. While more countries have drawn links with the SDGs in their revised NDCs, in many cases, such as in Liberia, Ghana or RoC, only general references to the SDGs are made, without specific information on how synergies and coordination will be ensured.

Paving the way to partnerships

Achieving the objective of the Paris Agreement will depend on countries’ ability to turn their climate plans into action and work towards more ambition. By enhancing the forest sector components of their NDCs, Colombia, DRC, Liberia and Laos have paved the way to achieving their mitigation and adaptation goals. They have also raised the profile of the forest sector to attract the required investments and support to implement nature-based solutions. The increased granularity and ambition contained in these NDCs can provide the basis for future partnerships with national and international stakeholders to design and implement effective agricultural, forest and land sector policies. More countries would do well to follow suit. 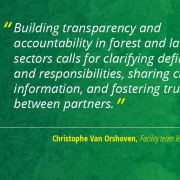 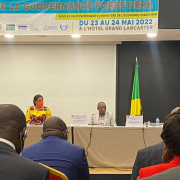 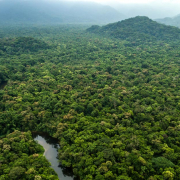